The living space of organisms

We all have our own living space, the place where we feel comfortable, like we were at home. We also have our routines, habits and that list of preferences that make us unique. Each of us, ultimately, have our own ecological niche, an extensive concept for each species that share the Earth with us. From it comes an important ecological processes such as competition or speciation, a key concepts for understanding the assembly and dynamics of natural ecosystems.

When you are asked how you would describe close people, the first thing that comes to your mind is their way of being when you’re with them and what they loves to do. We know what is the first thing they always ask in a restaurant, what annoys them, what sites they like to frequent, what they like to do when they have free time and even how they behave when they like someone. If we have also lived with them, we could guess almost their daily routine since they wake up until they go to bed. Although we do not always have the same behaviour, there are many traits, hobbies and routines that characterize and differentiate us. Each of us have our comfort zone, our hobbies, food preferences and people with whom we love spending our free time.

The dietary preferences of each of us and our routines and hobbies serve as a comparison to illustrate the diversity of ecological niches in the natural world. Source: Flickr, George Redgrave.

THE ECOLOGICAL NICHE OF A SPECIES

This “living space” that all of us have and in which we feel identified, is also comparable to the ecological niche of the organisms. The ecological niche of a species is a concept that always has been presented us as the “occupation”, “profession” or “work” that an organism carries up in the place where it lives (Wikipedia or CONICET), but the definition includes more than that. Hutchinson (1957) defined it as: ” n-dimensional hypervolume, where the dimensions are environmental conditions and resources, that define the requirements of a species to persist over time.” Despite the confusing definition, it is interested to point out the term “n-dimensional” as the ecological niche is based on this idea. An ecological niche is nothing more than all those multidimensional species requirements. In other words, the ecological niche of a species would be everything that involve the species and make it to prosper and survive where it is. Refers, ultimately, to all those variables that affect them in their daily lives, both biological variables -the contact with other species- and the physical and chemical ones-the climate and the habitat where they live-. An ecological niche of a species would be the spectrum of food it eats or can consume, the time of the day in which it is active to perform its functions, the time of the year and the way it carries out the reproduction, the predators and preys, the habitat it tolerates and all those physical and chemical factors that allow this species to remain viable. 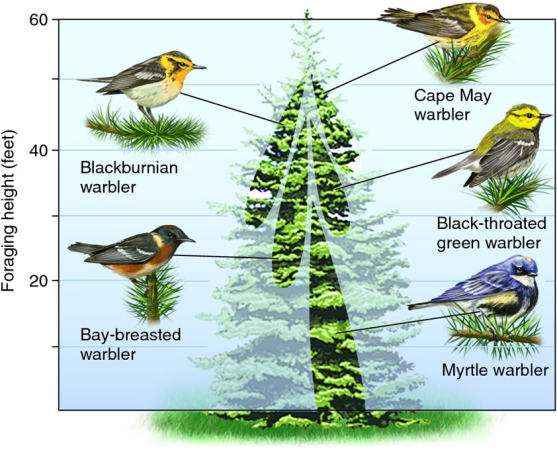 These 5 species of warblers of North America seem to occupy the same habitat (the fir), but actually not. The truth is that each warbler occupies a different position in the tree. Source: Biology forums.

To give an illustrative example, let us place ourselves in the African savannah. The main grazing ungulates and those which perform mass migrations are compound by zebras, wildebeest and Thomson’s gazelles. At first glance, you might think that their ecological niche is very similar: same habitat, same routine, same predators and same food. The same food? Absolutely not. During migration, zebras go ahead, devouring tall grass, which is the worst quality. They are followed by wildebeest, which eat what remains standing, and these are followed by Thomson gazelle, which eat the high-quality grass, which is starting to grow again. 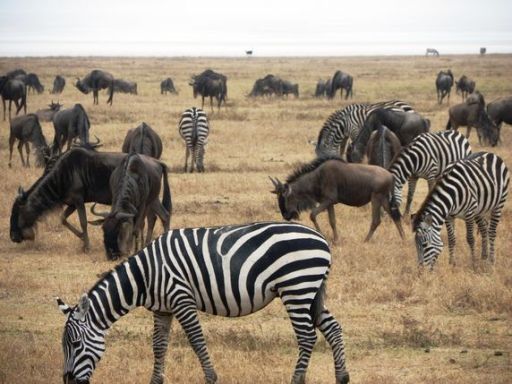 Although at first glance it may seem that feed on the same food, each species focuses on a different part of the plant. Source: Abierto por vacaciones.

CAN TWO SPECIES LIVE TOGETHER WITH THE SAME NICHE IN THE SAME PLACE?

The competitive exclusion principle, proposed by Gause (1934), states that two species occupying the same niche can not coexist in the long term as they come into competition for resources. Thus, in a competitive process for the same ecological niche, there is always a winner and a loser. In the end, one of the competitors is imposed by another, and then two things can happen: the extinction of the loser one (image A) or a traits displacement in order to occupy another niche (image B). In fact, the competitive exclusion principle is behind the current problems with invasive species. Invasive species niche is very similar to native species niche and, when they converge in the same habitat, the invasive species end up displacing native species, as they are better ecological competitors. It also often happens, of course, the opposite: the exotic species is worse than its counterpart and the competitor fails to thrive in the new environment. 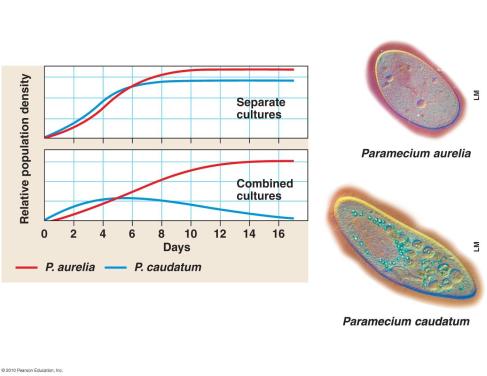 Image A | This study was conducted in order to observe the effect of competitive exclusion in two species of protists. Both species occupy almost identical ecological niches, but they are not living together in nature. The density of one falls sharply when they are forced to share the same space, until it eventually disappears. This same process occurs with invasive species. Source: Jocie Broth.

Image B | When the 3 species of Darwin’s finches (in different colors) coexist on the same island, a trait displacement occurs by competitive exclusion. Individuals from the ends tend to have very similar bill depths to those of the other species, resulting in a niche overlap and subsequent competition. The final boundaries are established thanks to this process. Source: Nature.

We have seen that to share ecological niche is synonymous of having conflict between species. However, there is a situation in which problem do not take place. The hypothesis of functional equivalence proposed by Hubbell proclaims that if the niches are identical and the species life parameters (fertility, mortality, dispersion) are also the same, none of them has a competitive advantage over the other, and the battle ends in tables. This fact seems to occur only in a very stable ecosystem in a Panama rainforest island (Barro Colorado). Different species of trees, as having almost identical parameters of life, do not compete between them and are distributed randomly, as if the individuals of different species belong to the same species. Furthermore, it seems that speciation in this kind of rainforest could also occur by chance, which would have caused the high density of species that harbor these forests. 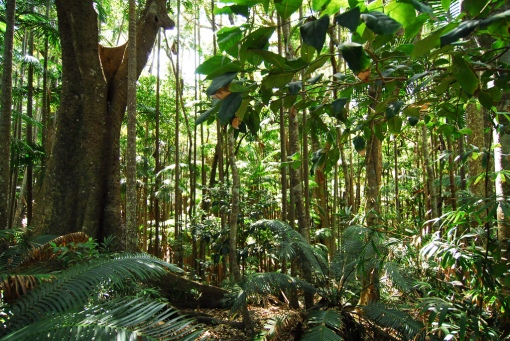 Tropical forests have a tree species density unique in the world. One hectare of tropical forest may contain up to 650 tree species, more than the number of tree species present in both Canada and continental US. Will Hubbell’s functional equivalence theory be behind the explanation for this curious fact? Source: Flickr, Jo.

Speciation, or the creation of new species, usually occurs when new ecological niches are created or the existing become unoccupied. In both cases, to occupy a new ecological niche imply a gradual differentiation from the initial population to become a genetically distinct species. As an example of formation of new ecological niches we have the case of the emergence of angiosperms. Their booming opened many new possibilities, thanks both to increasing diversity of seeds and fruits (which, in turn, increased the number of specialized species) and the emergence of complex flowers, which allowed the explosion of many pollinators (facilitating the emergence of new insectivores). As an example of unoccupied niche, there is the famous case of the extinction of non-avian dinosaurs. Dinosaurs dominated a lot of niches, from land to air ecosystems, and even the aquatic environment. Those empty niches was occupied by many mammals, thanks to their high fertility and plasticity (flexibility to adapt into different habitats). That eventually led large ratios of speciation in a short time, what is known as adaptive radiation.

This is Eomaia scansoria, an extinct species of mammals that lived at the same time as the dinosaurs. The extinction of the dinosaurs opened up a wide range of possibilities to mammals, which, although they were expanding, remained in the background. Their great plasticity led them to colonize many habitats, by occupying the free ecological niches left by the dinosaurs. Source: Wikipedia.

As we have seen, the ecological niche is behind fundamental ecological and evolutionary processes. All living communities today have been formed thanks to the niches of different species. Through competition, species niches were overlaping, and the communities were assembled like a puzzle. When a piece disappears, another takes its place, playing the role that the other had in the community. However, knowing the whole ecological niche of a species is arduous and, in most cases, impossible. As in human relationships, an exhaustive knowledge of everything that influences the life of a species (or the living space of a person) is of great importance in order to ensure their long-term preservation.